Alexander C. Earle, Perhaps the most colorful of all the Founders was Captain Earle. Only 17 years old in 1858, he was the junior member of the pioneer group. He left Bethany early to join the Second South Carolina Volunteers. A year later he organized the cavalry company, of which he was Captain, and fought under General Jenkins in West Virginia until the war ended.

For many years, legend had it that Earle was dead, and he was listed as deceased in the early catalogues. He was greeted as a hero returned when he was later found living in Arkansas and he attended the Karneas of 1882, 1907, and 1915. The last four years of his life were spent in the Confederate Veteran’s Home in Austin, Texas where he found real fraternal companionship again with the Delts of the Gamma Iota Chapter at the University of Texas.

Richard Havener. Alfred, Ecclesiast and physician, Dr. Alfred was the oldest of the Founders, being 26 at the time that organization was conceived. In the early years and as late as 1897, his name did not appear as an official Founder, but late documentary evidence has since proved conclusively that he not only was a

Founder but also one of those who shared the bulk of responsibility. Eugene Tarr accorded him the most prominent place in the infant organization. Alfred was one of the Founders who was also a member of the Masons.

After he left Bethany in the spring of 1859, Alfred “read medicine” in Kentucky and South Carolina, and eventually entered the University of Toronto, where he received his degree. Somewhat later he entered the clergy and became a minister in the Church of Disciples. He ultimately withdrew from the ministry and gave himself entirely to the practice of medicine.

The Fraternity is indebted to Alfred as the mature member of the embryonic group, the stabilizing influence in an organization that was predominately youthful.

William Randolph Cunningham, Cunningham, affectionately known as “Lord Chesterfield” in his undergraduate days, was 25 and a freshman in 1858. The force of his leadership is demonstrated by the fact that although he was just a freshman, he presided at the meeting from which evolved the Delta Tau Delta that we know. His Masonic background equipped him to draft the outlines of the new organization.

Fighting on the Confederate side of the Civil War, Cunningham was a member of the famous organization known as “Morgan’s Raiders.” Always an interested Delt, he followed closely the development of the Fraternity. He served as the president of the Indianapolis Karnea in 1883. He wrote the introduction for the Catalogue in 1884, declaring that he was … “Proud of our Fraternity, proud of its men and the high honored position which it has won among leading Greek letter fraternities of the land.”

Distinguished in public service, he was Assistant Receiver of Public Monies, Olympia, Washington for two years before entering Bethany, and Commissioner of the Provisional Government of Kentucky from 1862-1863. A minister in the Church of the Disciples, he lived his latter years in Ritzville, Washington.

John Lucius Newton Hunt, The scholar of the group was John Hunt, who graduated from Bethany in 1862 with “first honors” and received the Greek of Arts in Cursu and was chosen professor of higher mathematics. After a short tenure on Bethany’s faculty, Hunt went to New York and took his law degree in New York University, where he was acclaimed prize essayist and valedictorian of his class.

In 1880, he was the Republican nominee for the Representative to the United States Congress from a section that was predominately Democratic. In a hot contest, he was defeated by a slim margin.

An eloquent speaker, Hunt was elected Orator of the Twenty-fourth Karnea in 1882. At the time of his acceptance of this honor, he wrote the editor of The Crescent, “… hope to meet large number of Deltas, who now enjoy the fruits of our early struggles, when our plough almost stood still in the field of promise. We built better than we knew, but we laid the foundations deep down on the eternal rock. As a brotherhood throughout the land there is none better or more progressive, none with truer motives, none with purer men. I congratulate you upon the fabrics you have reared… Relax not your efforts until every prominent American college shall be made to see your standard raised and your work advancing…”

Jacob Snedeker Lowe The first known meeting of Delta Tau Delta was held in the room of Jacob Lowe. He was a member of the committee that drafted the Constitution and By-Laws. A widely known educator, he was successively principal of Geneva Normal School; President of Farmer College, Ohio; Professor of Mural Philosophy at Bethany; and Professor in the Geneva Normal School. He was born within a few miles of Bethany, but spent most of his life in Ashtabula, Ohio.

Lowe was chosen Orator of the Twentieth Karnea in 1878, and addressed the Karnea again in 1889. During that year, he wrote, “The history of the Fraternity for the last thirty years has been so full of interest and prosperity that I dare not allow myself to anticipate the future.”

Eugene Tarr An outstanding student and orator, Tarr’s home in Wellsburg, Virginia, was just six miles from Bethany. He attained one of the highest honors at Bethany in 1861 when he was chosen Orator for the Anniversary exercises of the Neotrophian Society. Old convention minutes show that he was the Historian of the Seventeenth Karnea at Meadville in 1875. A lawyer by profession, Tarr served two terms as prosecuting attorney of Brood Country, West Virginia, and for a number of years as proprietor and editor of Panhandle News. By character of a retiring nature, he was a lover of chess and good books.

In an early issue of The Crescent, when the first attempt was made to record a history of the Fraternity and the Founders were published by name for the first time, Tarr wrote the editor, protesting good-naturedly, “It was always out deliberate determination to keep the origin of the order, as far as we were concerned, untold; believing that the mystery shrouding it would leave full scope for imagination’s play, and not destroy the pleasant tradition current in the order about it.” This is another interesting sidelight on the character of one of our Founders, which reveals further the modesty, which undoubtedly denied us many significant facts.

John Calhoun. Johnson John C. Johnson, nephew of Joseph Johnson the first governor of Virginia chosen by the people, outlived all his founding brothers. Always intensely interested in government, he served two terms in the West

Virginia House of Delegates and was widely known as the man who molded the political ideas of John W. Davis, nominee of the Democrats for the President of the United States in 1924.

Johnson attended several Karneas, actively corresponded with many of his Delt Brothers, and joyfully conducted pilgrimages to Bethany College. His brother, Richard M. Johnson, Bethany 1860, was also a Delt. One of Johnson’s favorite pastimes was conducting tours of Bethany and pointing out the room where Delta Tau Delta was founded. He outlived the other founders by eight years

On the Fifteenth anniversary of the Fraternity’s founding he wrote to the editor of The Rainbow, “The past salutes the present, and joins it in hope for the future. Its founders built better than they knew.”

Henry King Bell, One of the most intensely interested and hardest working of the eight founders. A youth whose enthusiasm and loyalty were great, and whose capacity for organization earned him the title, “the great organizer.” Bell was a leader in the early days of the fraternity, and the one man given credit for saving the organization in its infancy when it seemed about to die. Bell left school before he graduated, but maintained a continuing correspondence with his classmates. His brother, Clarence, was a member of the chapter in the class of 1862.

In 1861, when the call to arms had prompted students to forsake Fraternity and books alike, and borderline Bethany was seething with turmoil, the future of Delta Tau Delta hung by a very slender thread. In desperation, one undergraduate sent out a call for aid to the alumni. It was Bell who answered first, traveling from his home in Lexington, Kentucky.

He quickly recognized the situation, and set to work with an aggressiveness that would do credit to any fraternity. Systematically he inspected almost every college of any educational stature within a radius of 100 miles, deliberately seeking an auditable institution in which to plant the Delt colors. At Jefferson College, Canonsburg, Pennsylvania, he found what he was looking for and as a result two Jefferson students, Rhodes S. Sutton and Samuel S. Brown, made the famous ride on February 22, 1861, of twenty-two miles in a severe snowstorm over a perilous mountain trail in order to be initiated into Delta Tau Delta and to carry their torch into the North.

Bell’s short but active career ended abruptly with his death in St. Louis in 1867. In 1909 Alexander C. Earle, fellow Founder, wrote a letter to the editor of the Rainbow paying this tribute: “He was the first missionary of the Deltas, and the chapter at (West) Liberty College, Virginia, the first fruit of his zealous care and patient cultivation…. His life could be written justice, courteous, kindly, affectionate esteem and helpful service to all with whom he had to do. May his spirit of Loyalty continue with us.”

The Founding House of the Delta Tau Delta Fraternity

This was the founding house of the Delta Tau Delta Fraternity and is one of approximately 16 extant structures in the Bethany Historic District built prior to the 1860s. An article published in 1978 reports that the house was built on the foundation of an old tavern or inn (The Rainbow of Delta Tau Delta 101.4, [Athens, Ohio: Delta Tau Delta Fraternity, Summer 1978]), although this claim has not been authenticated. It is known that William Kimbrough Pendleton and his wife Lavinia lived in an old inn in 1841-1842 while Pendleton Heights was being built, but the location of that inn has not been established. No records have been found at the Brooke County Courthouse to establish the exact date that a house was built on the lot, but the land book for 1860 shows that Jacob E. Curtis paid taxes on an improved lot at that time. However, deed books and tax land books support the theory, however, that the house was built between 1853 and 1856.

It was here that eight Bethany College students first met in the spring of 1858 and founded Delta Tau Delta, a social fraternity. The students were Jacob S. Lowe, Richard H. Alfred, Henry K. Bell, William R. Cunningham, Alexander C. Earle, John L. N. Hunt, John C. Johnson, and Eugene Tarr. The Bethany group was the principle undergraduate chapter from 1859-1861. After the Civil War, the chapter returned to Bethany in 1867, but financial difficulties caused the National Fraternity to revoke the charter. The chapter returned to Bethany in 1965. In addition to being the founding house of Delta Tau Delta, the house has also served as a private residence, a boarding house, a teahouse, a display area for Delta Tau Delta national fraternity, and the office of the Heritage Resource Center (later named Historic Bethany). Historic Bethany vacated this building in the spring of 2002. The future plan is for the house to be used as a national archive for Delta Tau Delta fraternity.

In 1978, the college completed a restoration of the historic structure under the direction of Grigg, Wood, & Brown Architects. Mark Trushel was the contractor for the project. 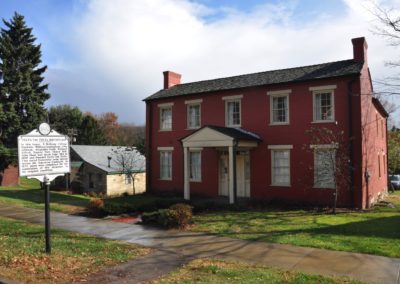 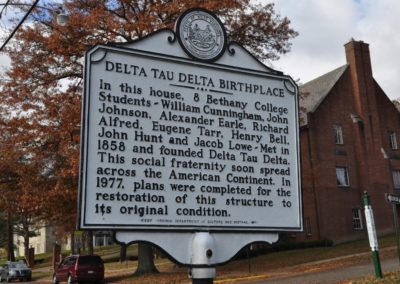 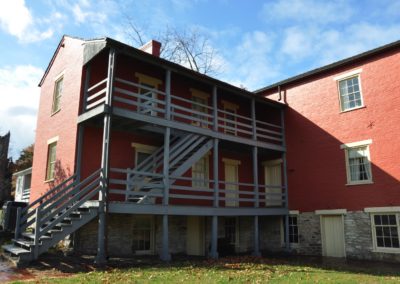 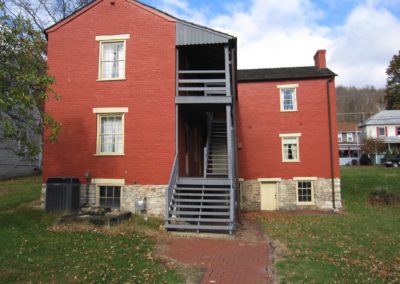 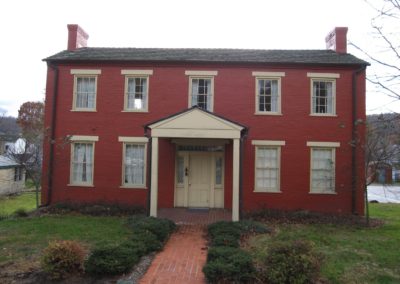 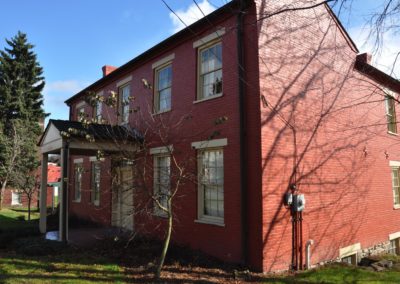 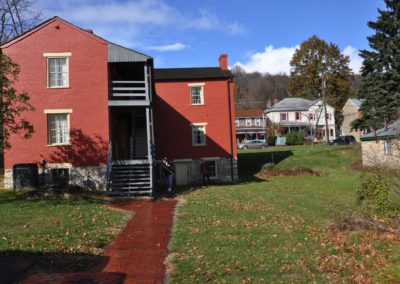 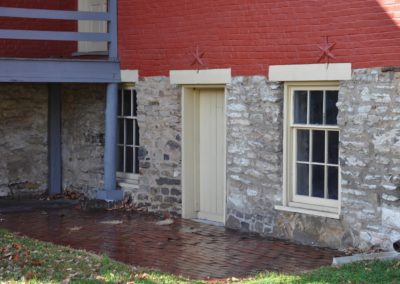 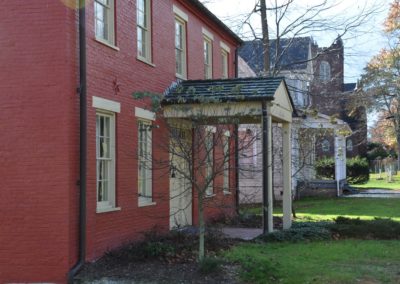 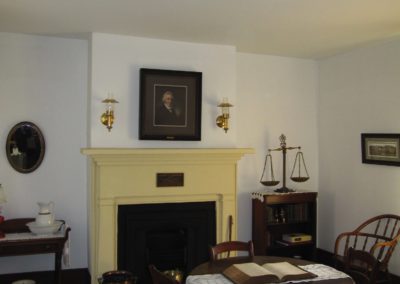 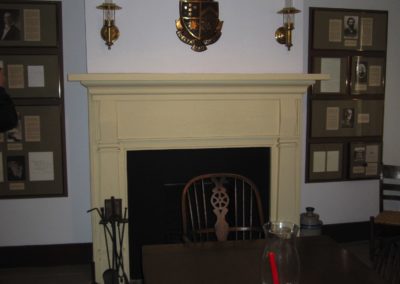 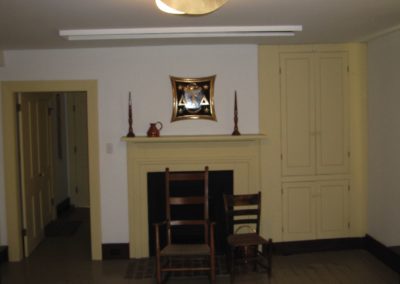 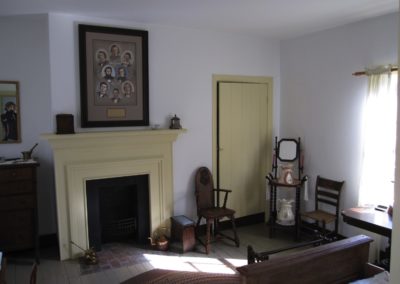 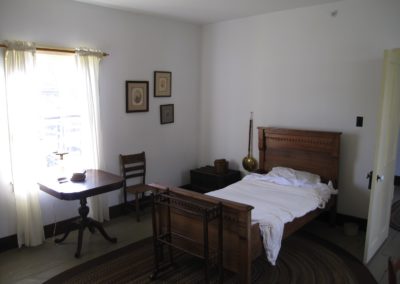 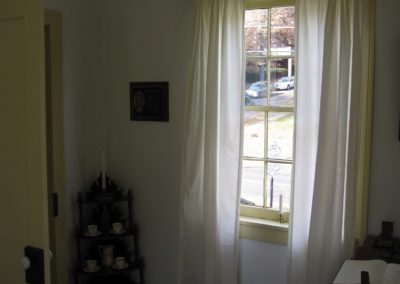 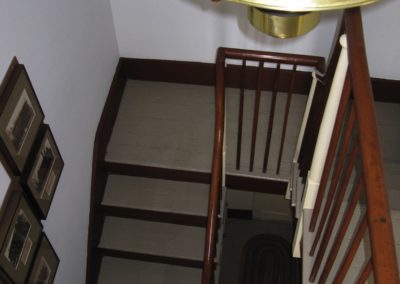 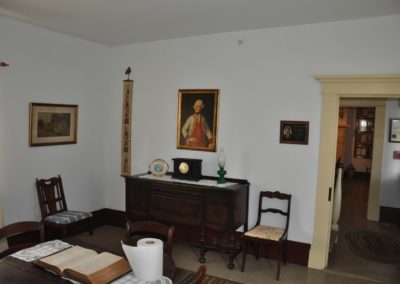 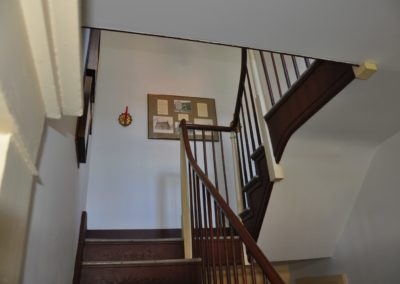 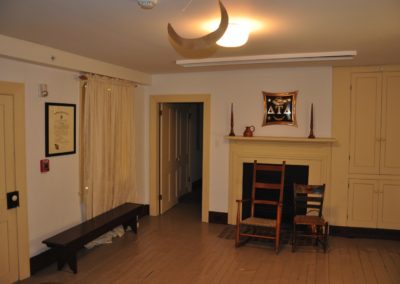 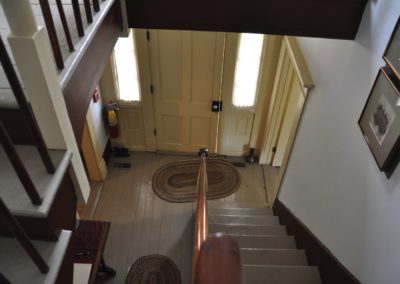 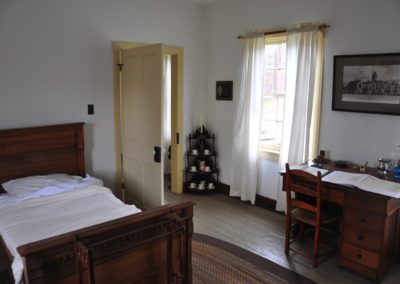 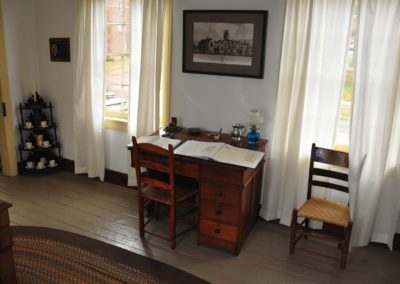 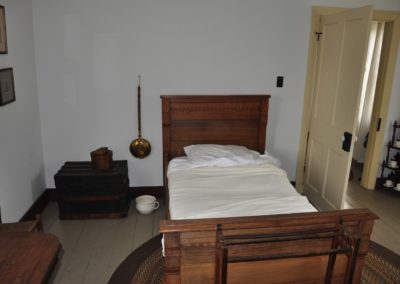 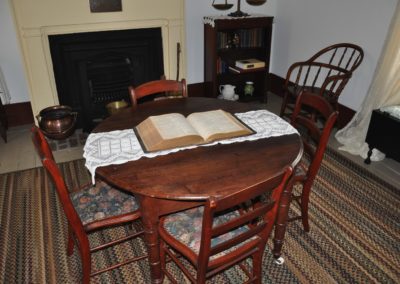 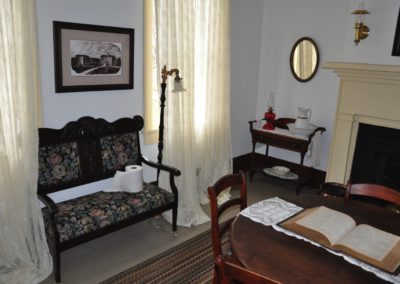 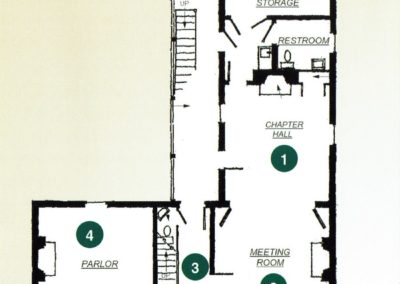 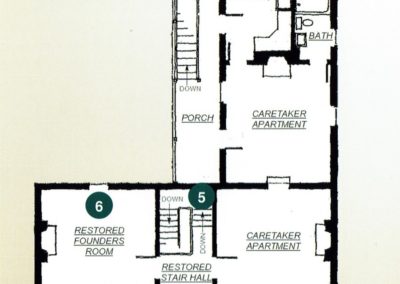