Delta Tau Delta Coat of Arms
The Coat of Arms originated when warriors first marked their shields with symbols so they could recognize friend or foe in battle. Coat of Arms and other armorial bearings – the study of which is called heraldry – thus came into widespread use. Heraldry developed extensively in Europe and England, particularly.

Delta Tau Delta’s coat of arms was designed in accordance with the strict rules of heraldry of the knights of the Middle Ages. It portrays the Fraternity’s ideals symbolically, the same ideals that you will hear explained in detail during your initiation. Prior to 1870, most chapters designed their own coat of arms. E.D. Curtis, Mu 1870, designed the first Delt Coat of Arms. His design was far more elaborate than the Arms we use today. Frank Rogers, Beta Rho 1899, copyrighted the Coat of Arms in 1909 and published it in The Rainbow that year while serving as editor. Because only initiated members fully understand the meaning of its symbols, only initiated members of Delta Tau Delta may use the Coat of Arms. Pledges may use the Greek letters, DTD. Use of Delt insignia is a privilege and honor reserved for those who have made a commitment to membership.

The components of the Coat of Arms are its colors, the shield, charge, torse, crest, and motto. The Colors – The present Coat of Arms also incorporates the Fraternity’s official colors, which are royal purple, gold, and white. The Fraternity’s colors were important because many members wore them on clothing as sashes and caps in lieu of badges, since official badges were expensive and not every member had one.

The Shield – The shield is the largest portion of the Coat of Arms; it varies in shape and size. The surface of the shield is called the “field” or “ordinary.” Delta Tau Delta’s field is divided into four areas. Dividing the field is called marshalling. The Charge – The charge is an emblem, smaller than and placed on top of the ordinary. Charges can be either realistic or symbolic; some common charges are stars, lamps of knowledge, diamond shapes, trees, lyres, animals, crowns, and other natural objects. The meaning of Delta Tau Delta’s charges is revealed during the initiation ceremony.

The Torse – Delta Tau Delta’s torse is a twisted, rope-like symbol above the shield, and it contains the official colors.

The Crest – Delta Tau Delta’s crest is an eye rayed in glory, located directly above the torse. Historically, crests were placed above the helmet so a combatant’s followers could distinguish him, the leader, from others wearing the same armor and colors. Many heraldists maintain that when a Coat of Arms included a crest, it implied the bearer was of superior standing. The Motto – Most fraternities have secret mottoes from which their names are derived; many have more than one motto, one public and the other secret. Out motto is the Fraternity’s name inscribed on the ribbon beneath the shield.

The Coat of Arms is a most important symbol in Delta Tau Delta and should be treated with the utmost respect. When you become an initiated member of the Fraternity you will be able to look upon the Coat of Arms and understand the meaning that is contained within. Yet there is other insignia that Delta Tau Delta uses to designate itself to the rest of the world. The Badge – The Delt badge is designed with classic simplicity and symbolic meaning. It is the insignia of an initiated member of Delta Tau Delta. It is not a pin, it is a badge, and is worn like a badge, with pride. The badge is worn when a brother is appropriately dressed in a collared shirt or sweater. It is always worn over the heart of a shirt or vest. It is never worn on athletic clothing, the lapel of a suit coat, uniforms, or an uncollared shirt. The Pledge Badge – The pledge badge is the insignia of a recently pledged member of Delta Tau Delta. The same rules of dignity and good taste apply to wearing of the pledge badge. It is to be worn over the heart on a collared shirt or sweater, but not on a coat, belt, or hat. The Arch Chapter Jewel – The Arch Chapter Jewel, worn with formal dress, is a reproduction of the Coat of Arms. The Jewel worn by a division president is enameled in color only as it regards his particular division and is suspended from a ribbon of the corresponding color. The Jewel worn by other members of the Arch Chapter is enameled in full color and suspended from a purple ribbon. Small white and gold enameled bars between the jewel and the ribbon designate the office or offices filled by the wearer. The Flag – The flag of Delta Tau Delta is rectangular in shape and in proportions of three to two. The field is purple with the gold center bearing the Greek letters Delta Tau Delta in white with a purple border around the letters. The Seal – The official seal attests the action of the Arch Chapter and the Fraternity. It is kept at the Central Office and is used on all official documents such as charters and membership certificates. 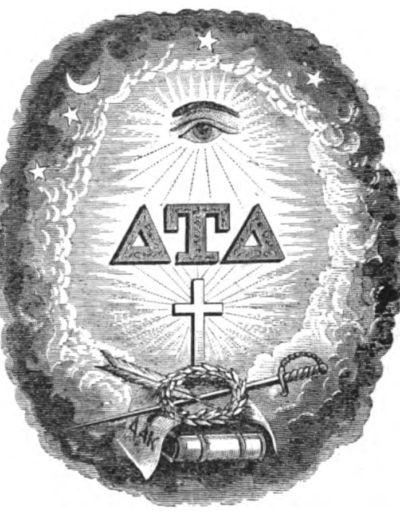 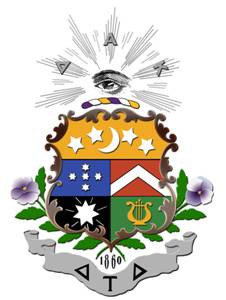 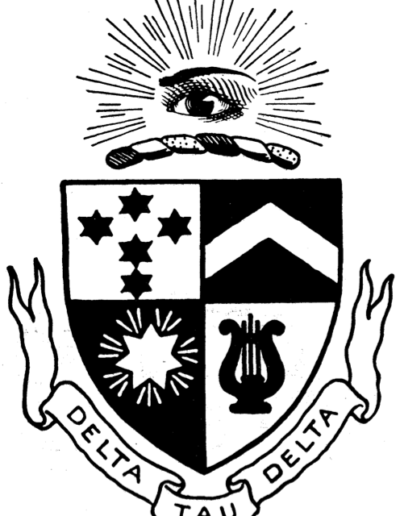